Penn State researcher Chunshan Song has a plan to address one of the most important issues facing the world today — reducing greenhouse gas emissions to curb the negative impacts of climate change.

Seeing carbon dioxide as a raw material rather than a waste product could lead to a more sustainable future.

At the 2015 United Nations Climate Change Conference in Paris, 195 countries agreed to investigate and adopt methods to reduce emissions of gases including carbon dioxide. Carbon dioxide is released into the atmosphere in two basic ways: naturally, through plant respiration and decomposition, as well as from human activities, such as deforestation, cement production and energy generation from burning fossil fuels.

Instead of looking at carbon dioxide as a pollutant or waste product, Song sees it as a valuable ingredient to create fuels, industrial chemicals and other materials.

Song plans to use carbon dioxide as a raw material to create fuels, chemicals and materials that are traditionally produced from petroleum. He’s a world leader in this approach, known as carbon dioxide conversion or carbon dioxide utilization, and chairs a committee for the International Conference on Carbon Dioxide Utilization (ICCDU).

In Song’s laboratory on the University Park campus, he has seen results that indicate carbon dioxide conversion could be the best long-term solution to reduce excess carbon dioxide in the atmosphere. 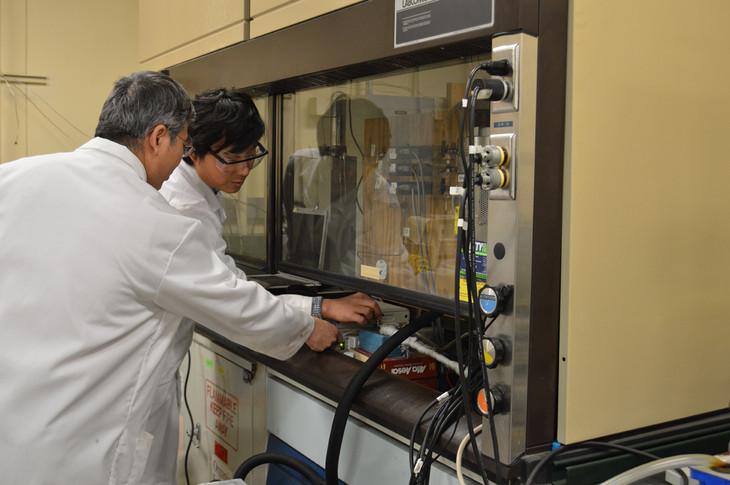 Caption: Chunshan Song and Xiao Jiang use a flow reactor to investigate the properties of chemicals created through carbon dioxide conversion.

Song’s primary goal in his research — and the dream that has fueled more than a decade of his carbon dioxide conversion studies — is to develop a sustainable energy cycle for the future. Part of this involves addressing what he sees as an imbalance in the world’s natural global carbon cycle.

“Normally, carbon dioxide in the air is absorbed by growing plants through photosynthesis, and plants either are eaten by animals or they die. Matter from decomposing animals and plants is used by microbes for respiration, and this process releases carbon back into the atmosphere, which continues the cycle,” says Song, who is a distinguished professor of fuel science.

However, the rapid consumption of fossil fuels, which releases carbon dioxide, has offset that balance, he says.

“Most of the coal, petroleum, natural gas and other fossil fuels we use today for power originated between 280 and 300 million years ago,” Song says. “They are burned in a matter of minutes, which means we’re using them up millions of times faster than they were formed. There’s no way you can be sustainable in this fashion.”

Song believes the global carbon cycle balance can be restored by changing how we view carbon dioxide. Instead of looking at it as a pollutant or a waste product, Song sees carbon dioxide as a valuable ingredient for creating fuels, industrial chemicals and other materials.

The goal of carbon conversion is to break apart carbon dioxide into its parts — carbon and oxygen molecules — and then use those parts as building blocks for different materials. Song's approach requires three main ingredients: carbon dioxide, a chemical catalyst and hydrogen, which can be created when water molecules are chemically separated using renewable energy, such as through the chemical process of electrolysis.

Catalysts are chemicals that influence how carbon and hydrogen molecules fit together, and they play a critical role in what products can be created through carbon conversion. They modify the surface properties, such as surface electron density, of the molecules, which allows the molecules to fit together in new and different ways. For example, it could allow for more carbon or hydrogen atoms to be added to the desired molecule, or it could change the types of bonds between carbon and hydrogen atoms. It’s similar to modifying the shape of a puzzle piece so that it can connect to a new puzzle. Every change made at the atomic level affects the end product and how that product functions.

To develop new, selective catalysts for carbon dioxide conversion, Song has been working with Xiao Jiang, a postdoctoral scholar in the EMS Energy Institute; Wenjia Wang, Ph.D. student in energy and mineral engineering; Nuttakorn Bore, a visiting Ph.D. student from Chulalongkorn University in Thailand; and collaborating researchers at Dalian University of Technology in China. They have created and tested several new catalysts within the past several years, and have seen promising results.

“We’ve known for many years that you can create hydrocarbons such as propane and ethane using carbon dioxide conversion, but through our work with surface modification and the creation of novel catalysts, we’re showing that it’s possible to selectively produce valuable chemicals and fuels,” says Song. 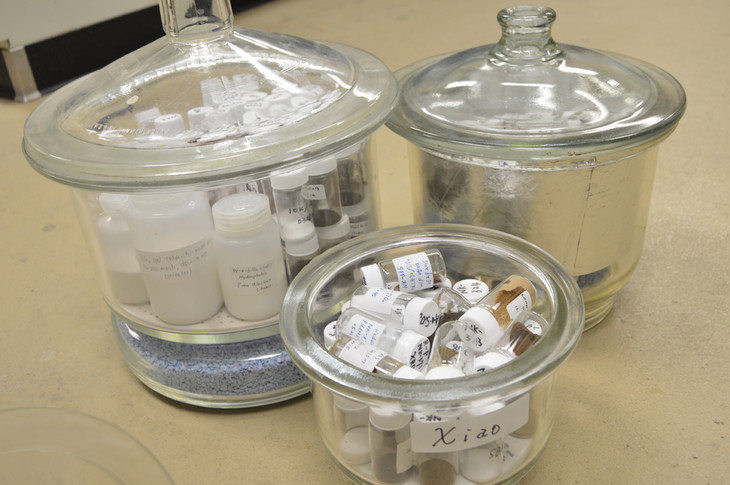 Caption: A portion of the catalysts that Song and his research team have investigated. In the course of pursuing his Ph.D. in energy and mineral engineering, Xiao Jiang (now a postdoctoral researcher) investigated the effectiveness of more than 400 catalysts.

By modifying the surface of the molecules in the recipe, Song has been able to transform carbon dioxide directly in a one-step reaction to ethylene and propylene, among other transformations. These two materials belong to a group of molecules known as olefins and are widely used to manufacture many useful materials: bottles for water and soda, wrinkle-resistant fibers, plastic bags, bottles and films in the food industry and machine parts used in medical devices.

The possibilities for materials that can be created through carbon dioxide conversion are seemingly endless, depending on the catalyst used. Iron combined with cobalt is among the catalysts Song’s group has used to produce olefins. He has also designed a different catalyst, copper coupled with palladium, to convert carbon dioxide directly in a one-step reaction to methanol, which is widely used in chemicals and fuels.

“Some of the criticism in the past has been that the carbon dioxide conversion process requires extra energy for hydrogen production, which uses natural gas or coal today, so there’s a net loss of energy and the process wouldn’t actually be sustainable. But we will use renewable energy for hydrogen production, and in fact researchers at Penn State and elsewhere are investigating the use of renewable energies like solar or wind to generate hydrogen, which can sustain the process,” he says.

He has been able to increase the efficiency of some of his carbon dioxide conversion processes by 300 percent over the conventional state-of-the-art processes in the past few years, by adjusting catalysts and tweaking his process.

“It has been my dream to develop a sustainable green energy cycle that communities around the world can use, and I think that carbon dioxide conversion provides a promising path forward. It really is a sustainable way to build a new energy cycle,” he says.