Dutton Institute Director Dedicated to Enriching Lives of Others

Author, administrative leader, university senator and even student — these are just a few of the numerous roles Ann Taylor has held over the more than 20 years she has spent in the Penn State community, and they’ve all played a role in helping her achieve her career goals. 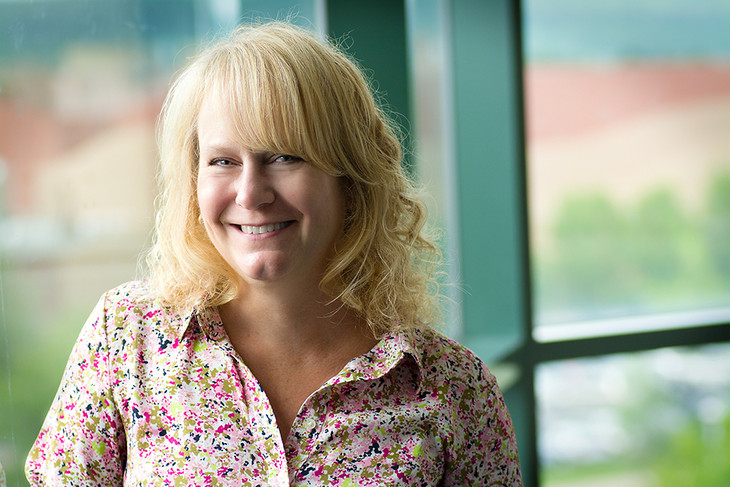 “It’s been great to work in so many positions where I can have a hands-on aspect to my work and also collaborate on resources that can benefit faculty, staff and students across the University,” said Taylor, who is the director of the College of Earth and Mineral Sciences’ (EMS) John A. Dutton e-Education Institute.

Taylor has been involved with distance education at Penn State since 1993, starting with the Office of Program Planning. After a move to the then-Department of Distance Education, she served on a four-person team that was tasked with envisioning what an online campus for Penn State might look like.

From there, Taylor worked her way up the ranks before being selected the Institute’s director in 2012, a position where she helps EMS plan and develop online programs that are tailored to the needs of adult professionals worldwide.

“Being in a leadership role has been both fun and challenging,” said Taylor. “I’ve always been committed to helping those around me succeed and grow in their own career and life paths. I believe everyone has something to offer; as Institute director, I just need to learn what those strengths are and help that individual to make the best use of them.”

In her various roles, Taylor has seen the considerable growth of distance education over the last several decades.

“I’ve been lucky to have been involved with distance education as it evolved over the many years I’ve worked in the field,” Taylor said. “It has blossomed into a major sector of the University with a demand that’s hard to keep up with.”

Sharing her expertise through writing

Taylor’s years of working alongside other learning designers and administrators to implement effective distance education programs have allowed her to share her knowledge in various settings.

“I’ve been asked numerous times over the course of my career to give presentations on the best ways to make distance education more effective and worthwhile for students,” she said, “and a large part of that is because of my connection with this institution.”

One of Taylor’s presentations led her to write an instructional book through collaboration with two other distance education professionals — Thomas J. Tobin, coordinator of learning technologies in the Center for Teaching and Learning at Northeastern Illinois University, and B. Jean Mandernach, research professor and director of the Center for Innovation in Research and Teaching at Grand Canyon University.

“We were talking after a presentation that we did together and were joking about compiling all of our work into a book,” Taylor said. “Next thing you know, we had a publisher that was interested and we were on our way to writing it.”

The group’s book, “Evaluating Online Teaching: Implementing Best Practices,” which was published by Jossey-Bass in 2015, offered the first comprehensive set of strategies that university administrators and faculty can use to improve the quality of online teaching and student success.

“Writing the book was a wonderful experience that allowed us to participate in conferences and share our hard work,” said Taylor. “I’ve enjoyed seeing our guidelines be implemented by other faculty involved in distance education across the nation.”

In addition to distance education, Taylor’s contributions to the community include University service.

The University Faculty Senate comprises 200 faculty senators that represent each college and campus, undergraduate and graduate students, and University administrators, who collaborate to oversee University educational matters, act as a consultative body to the President and serve as a forum for the exchange of ideas among faculty members.

Taylor was recently selected to serve as secretary for the Faculty Senate during the 2016-17 academic year.

“I’m thrilled to be selected for this position,” Taylor said. “I think serving as secretary will be incredibly beneficial for my role as director of the Dutton Institute because I will handle key issues and interact with faculty at Penn State, which will allow me to see the impact that these types of decisions have on other areas of the University.”

Taylor emphasized the unique perspective she will bring to her new position on the Faculty Senate.

“My colleagues always ask me how decisions will affect distance education,” she said, “and I’m able to offer insight into that specifically just as they do in their respective fields.”

In addition to her Faculty Senate responsibilities, Taylor has been involved with numerous University committees, such as the General Education Task Force, the Penn State Ad Hoc University-wide Committee on Instructional Intellectual Property and the Council on Engaged Scholarship. She has also served on eLearning Magazine’s Editorial Board since 2013 and is a reviewer for two additional journals in her field.

Pursuing a doctorate through Penn State

After more than two decades of working in a professional setting, Taylor still considers herself a student who enjoys learning.

She is currently pursuing her Ph.D. in workforce education and development through Penn State, and she plans to finish her doctorate in May 2017.

“It’s been exciting to continue being a student while in the workplace, and I think pursuing my doctorate has enhanced my passion in what I do at the Dutton Institute,” said Taylor. “It’s allowed me to see the difference my work can make, and I’m excited to see where distance education goes in the future.”