From Leaves to Solar Cells

Biological materials boost the next generation of solar technology
By:
Matt Carroll

Shashank Priya sees a future where instead of throwing away broken electronics, those devices heal themselves, and where machines evolve, even changing their form and function, to adapt to the task at hand.

It might sound like of the stuff of science fiction. But if the technology becomes reality, it may be in part because of innovative research happening in Priya’s laboratory, where scientists are combining biological and artificial materials on the molecular level to create new biophysics.

“If you think about the biological world, there are attractive properties like how we can heal from a cut, or build more muscle as we do work,” said Priya, professor of materials science and engineering and an associate vice president for research. “We think it’s possible to transfer a lot of these advantages into the artificial world.” 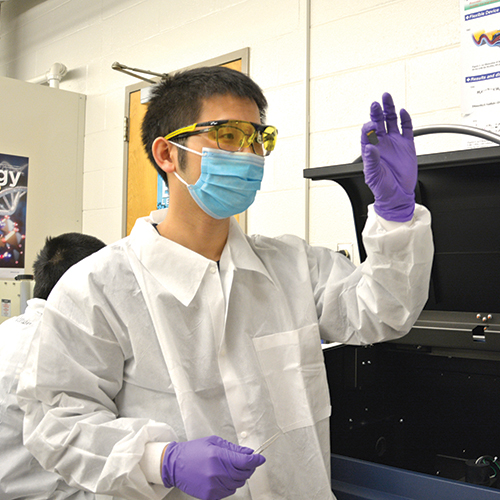 Priya and his team are using biohybrid materials to boost the performance and stability of nextgeneration solar cells. By adding biological materials like proteins and DNA, the scientists aim to create more efficient, stable, and environmentally friendly solar technology than what exists today.

And with an almost inexhaustible bank of biological materials to choose from, the team’s molecular approach could open doors to advances in other areas like sensing, energy conversion, photodetectors, and neuromorphic computing, Priya said.

“If we can merge these two worlds together, the biological and the artificial, we can create new properties that are impossible to achieve in the artificial form only,” Priya said. “These kinds of hybrid materials could provide a new direction for people to do research and develop next-generation devices that are more interactive, adaptive, and longlasting.”

Outside Priya’s office, elms shade the Old Main lawn in the heart of the Penn State University Park campus. Their leaves are hard at work turning energy from the sunlight into food for the historic trees.

Priya, whose team designs and manufactures cutting-edge solar material, was inspired by what’s outside his window to experiment with biohybrid materials in his lab.

“The photosynthesis process used by leaves has been able to support the energetic needs of plants in all weather conditions and maintain consistent performance for decades,” Priya said. “This is still challenging to achieve in traditional solar cells, and we thought, ‘what if we can find a way to take some of these advantages to boost the performance of this technology.’”

Traditional solar cells, often found on roofs or in large arrays in fields, are made with silicon, but scientists believe they are approaching the saturation limits of this technology. 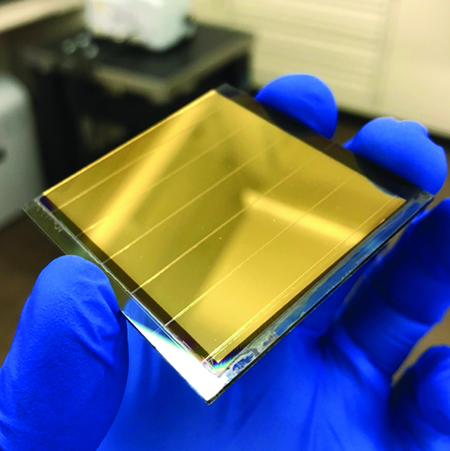 Perovskite solar cells, named for their unique crystal structure, have become an area of intense research because they have shown promise to be more efficient at converting sunlight to electricity and less expensive to produce. But the devices are not stable enough for real-world applications.

Turning to biomaterials, Priya and his team have made a string of advances, including a study published in ACS Energy Letters that found wrapping perovskite material in a DNA shell boosted efficiency and dramatically reduced costs, and a study published in Nano Energy that found an anti-malaria drug can substantially improve the stability of these solar cells.

“By borrowing from nature, we can find biological materials that boost solar cell performance and allow us to develop cheaper, more environmentally friendly technology,” Priya said. “In the future, we may essentially replace some expensive chemicals inside solar cells with relatively cheaper natural materials.”

Commercial solar arrays consist of hundreds or thousands of individual solar cells, and even small technological improvements can add up to make a significant impact.

Advancing the technology may be even more important as individuals, businesses, and countries look increasingly at renewable energy sources to offset the impacts of climate change.

“Professor Priya’s research bridges the gap between discovering new materials with interesting properties and utilizing these materials in inexpensive devices that are typically powered by non-traditional sources of energy,” said Susan Sinnott, professor and department head of materials science and engineering. “This research is important because he is translating materials development and discovery to products that will improve people’s lives.”

Despite concerted efforts to eradicate the scourge, millions around the world are stricken with malaria every year.

Doctors often turn to the drug Artemisinin (ART) as a front-line treatment. It is credited with saving millions of lives, and the researcher who discovered its benefits earned a Nobel Prize for her work in 2015.

That’s not bad for a medicine derived from a humble herb, the sweet wormwood. But it turns out extracts from the plant may have other, unexpected benefits. 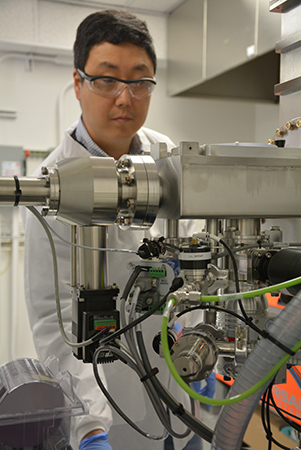 Priya and team found that adding ART to perovskite solar cells addressed a major issue with the technology—how long the solar cells can survive in real-world settings—without compromising their energy-production efficiency.

“The major issue in the ongoing perovskite photovoltaic research is their lifetime, which is at a weekly-level due to the material’s intrinsic issue: the perovskite crystal is not stable in the ambient environment,” said Kai Wang, an assistant research professor and member of Priya’s lab. “We thought the functional chemical groups in some biomaterials, like ART, may help heal the vulnerable perovskite.”

When placed in a liquid solution, the perovskite and ART automatically bonded and formed a packaging-like layer that protected the biohybrid from up to 90 percent of the water.

This discovery could protect perovskite solar cells from being degraded by moisture or humidity in real-world applications. The solar cells in the study retained 95 percent efficiency after a one-month deployment, the scientists reported in the journal Nano Energy.

“Finding the right molecules from nature could be a much more efficient way than creating them from scratch if both could lead to the same result,” Wang said. “And nature has already provided us this bank through millions of years of evolution. Collaborating with nature looks like an efficient way to accelerate our research.”